Posts tagged with
Today, the Nambu Network released a much needed update to their native Mac OS X Twitter client Nambu.
A lot of sophisticated twitter clients are written in Adobe AIR. This has the advantage that that client can run on multiple platforms, but also has certain disadvantages like that the UI isn't like a real Mac (or Windows) program, and the behaviour of the application can be different than a native app.
So, after trying Twhirl, TweetDeck I ended up installing and running Nambu, and haven't looked back since.
The new update includes a new UI, which allows for multi-column view. You can add or remove columns at will and you can also re-order them. The UI is nice and clean, and easily readable, in contrast to TweetDeck for instance, which makes my eyes hurt trying to read it. 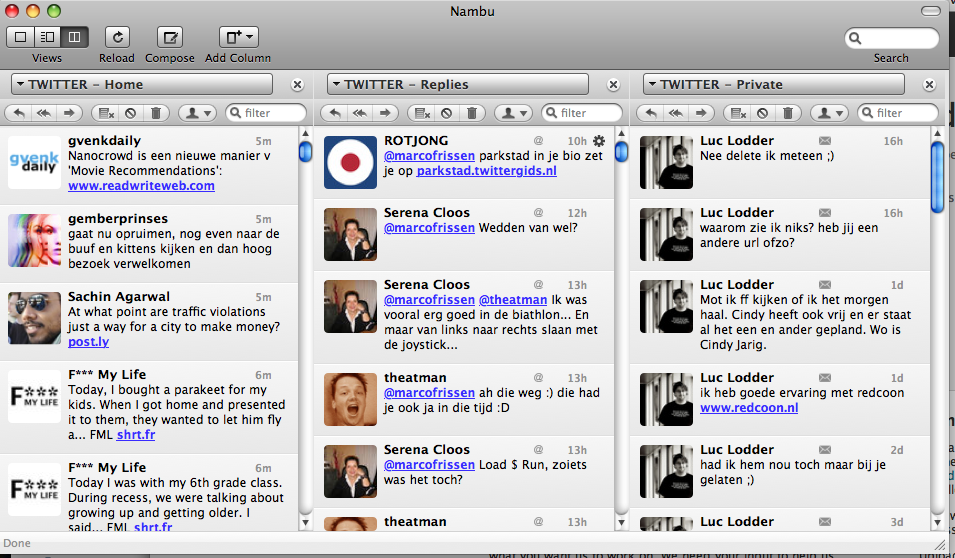 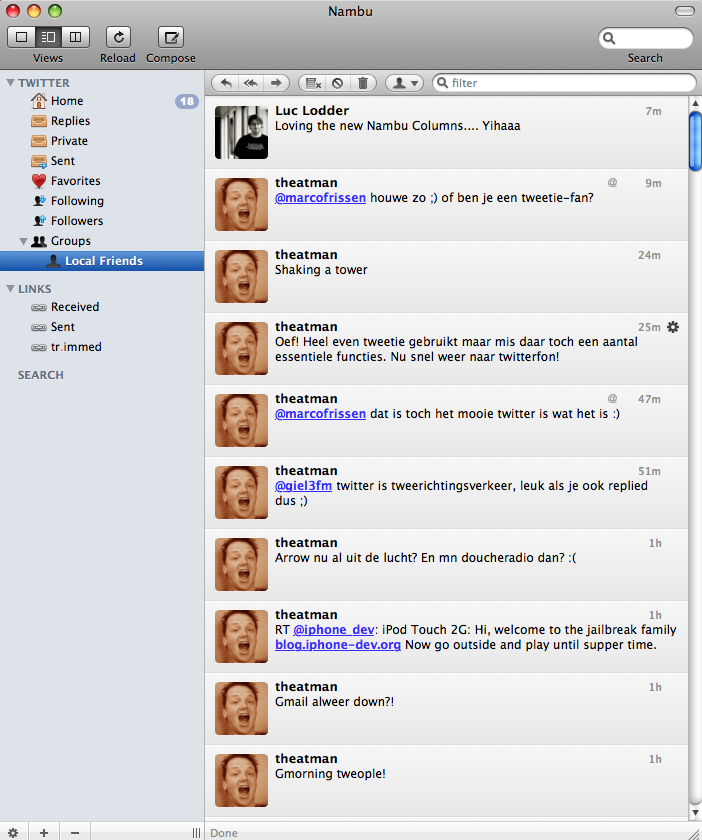 The application also has a lot a bugfixes and seems faster too.
However, there are still some things missing, but the developers seem to be keen to listen to people and implement desired (if useful) functionality pretty soon.
Personally I'd like to have a threaded discussion view, or at least a way of going through replies in an organised way.
Also, you cannot put your friend groups in the column view.
What can I say, if you want to use a nice and native Twitter client on OSX, Nambu is a good step in the right direction. It's not fully grown up yet, but it has a lot of potential.
On a lighter note than previous posts.. Everyone seems to be doing it, and I'm going to have a go at it too.  - lots of crap talk about iTunes, Appstore successes and other sales
- 17" "unibody" MBP is a 99% cert
- New Mac Mini w/new intel CPU and no more Firefire (which would suck)
- no iMac update, these will "silently" be updated after MWSF09 I think,
unless they're going to pitch this as a "first quad core consumer
all-in-one desktop"
- updated iLife and iWork suites and
- improvements on MobileMe (again) for functionality in above suits
- no iPhone Nano (but possibly an iPod Touch Nano!)
- demo of Snow Leopard with a few bigshots in the industry and it'll be
available right after the WWDC09 possibly  I don't think there'll be much iPod/iPhone related stuff, it'll probably
be mostly Mac related. I expect a "special event" by the end of
February, March with more iPhone/iPod announcements.  There, now I am among those geeks that consider themselves important
enough that their predictions actually matter... (no, really)