Only sixty people would be selected among hundreds of interested tweeps. I was one of them.
But lets recap the weekend in a chronological way, as far as that is possible.
ISSHouse
What can I say? Initially I planned to travel back & forth between my home and Cologne, but at some point I decided it would be easier if I could just stay in a hotel. Some people already booked at Geisler (quickly renamed to ISSHouse), a rather stuck in the 70s hotel very close to the SpaceTweetup pickup spot Porz-Wahn, so I was lucky I got a room there too. And what a great decision that was! The oddest thing of the hotel was the zombie receptionist who was stressed out of all those international people gathering in the hotel. But hey, it was clean and the beds were ok.
Friday
The weekend got off to a very good start with the SpaceKoelsch diner at Gaffel am Dom. Tweeps gathered in the afternoon across the city and it is then I first met a few people I have been tweeting with quite a long time, but never saw in person. Funny, the vision in your head of certain people can be completely different in real life. So, first a nice coffee at Woyton. 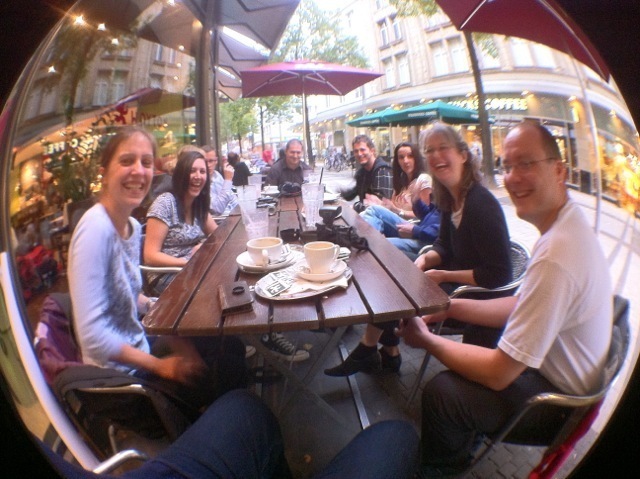 Amazing how quickly you *click* with likeminded people. I'm usually not a very outgoing person, but I thought the SpaceTweetup crowd was amazing. After a bit, it was time to go to Gaffel am Dom, where we'd meetup with the rest of the SpaceKoelsch people.
Gaffel is huge! Our group had about 6 tables together and soon the crowd flocked towards our little corner of the room. Big cheers when @Camilla_SDO arrived with her bodyguard @rocketman528. Who'd think a rubber chicken could be that famous! 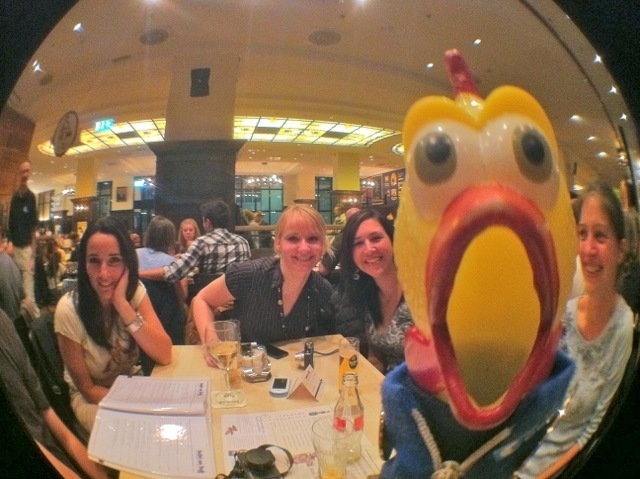 The payment system for drinks (Kölsch!) is easy at Gaffel. The waitress puts a little indent on the coaster and when you leave your total will be counted and you pay. Simple. All of a sudden the coasters were picked up by the waitress and @danielscuka (also @esaoperations) told us drinks were on @ESA until 10PM. I think that is when the #AWESOME was first coined, and that word never left the SpaceTweetup vocabulary. 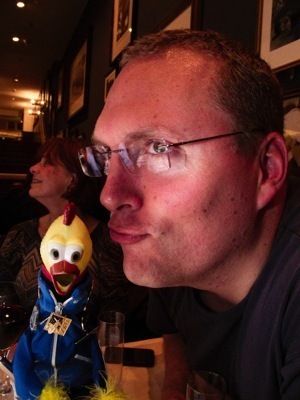 I think Jaap (@tjaap) found a new girlfriend!
After SpaceKoelsch, a group of people wanted to go have a drink at a place a littlebit more quiet, but halfway we lost our american friends, so we ended up with about 8 people in a local pub, who was calling it quits after our first Koelsch. Lame.
And then there were only 6 of us: Sebastian (@smarcu), Alex (@starlingLX), Joachim (@justbe74), Virginie (@giniexxcee) and myself (@mfrissen). Saturday was going to be a tough day for all of us.. Sebastian knew a nice club and we went there for a few more Kölsch and talks. At about 1:30 we called it quits and split up, Virginie, Joachim and me catching the S-Bahn to Porz-Wahn. Or so we thought. When we got on the platform we saw the train leave. Damn. Now what? Next one would be in an hour. Well... only one option: Kölsch! Around the corner there was a club as well. 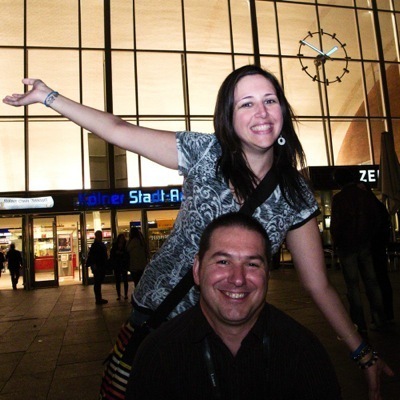 My last picture of that night, eh morning was taken at 3:28, close to the hotel. So I guess we were back in the ISSHouse around 3:30.
The first day had already been AWESOME!
Saturday
Oh my, who came up with that crazy idea to drive 2.5hrs to the Speyer Sinnsheim Technik Museum? We had to leave at 8:00 am and the first trip seemed endless. I was driving and Karen (@datachick), Rob (@projmgr) and Virginie (@giniexxcee) were brave enough to get into the car with me.. 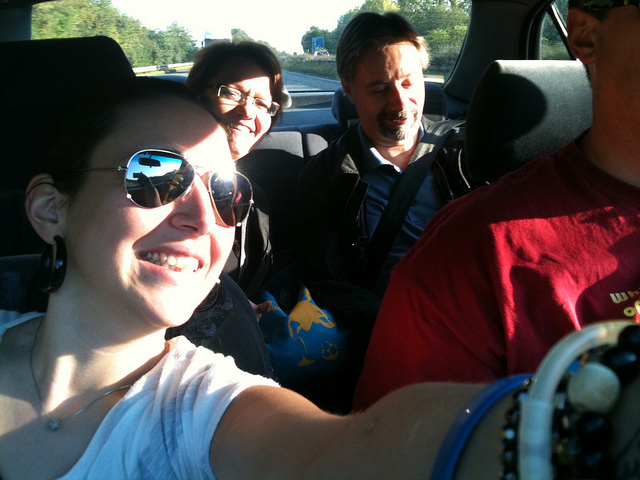 (picture by Virginie)
Oh, and let's not forget Astrobarbie (@venusbarbie) who was kind enough to show us the way! 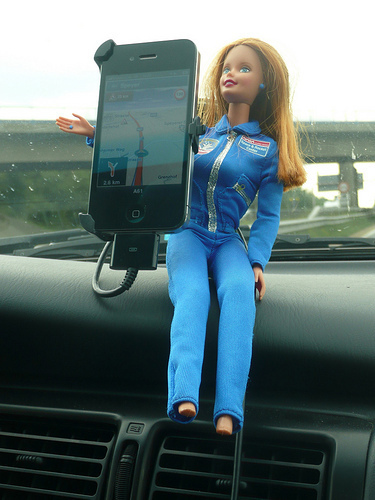 (picture by Virginie)
After what seemed an endless ride (not true, certain people just had to visit the 18+ Erotik shop near the Autobahn!) we arrived at Speyer, the last group to join.
In Speyer there is so much to see you really need a full day to check out everything. Of course, we were mostly interested in the space stuff, and the Buran. 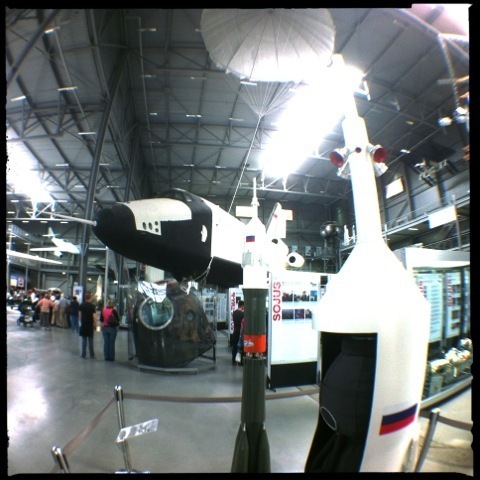 A real Buran! This one never flew, but still it is probably the only one that is preserved in such a good shape. Spacegeeks would love the Speyer space hall. Not just the Buran, but also a real Soyuz capsule and lots of models, including a real full-size training Spacelab that was used for the first Spacelab (D1) mission. 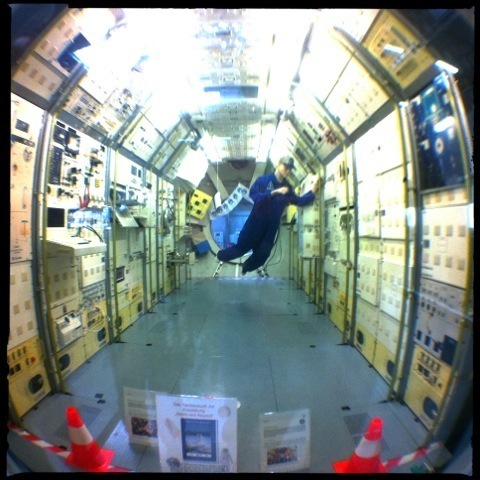 We had to leave on time and before we knew it, we were already zooming along the Autobahn en route to the Bonn observatory, where we would meet yet another group of SpaceTweetup participants (among them Matthias (@SpaceRaceKids), Roland (@HollandSpaceCenter) and Paolo (@amaroso)). There a few of our STS-135 alumni would present their experiences to the amateur astronomers of the observatory. And of course a great BBQ opportunity! And Lynn (@lynnvr) would tell us something about the awesome HyperX addon for Celestron Cassegrain telescopes. Cool if you're into astrophotography.
The observatory was a monument so we got a tour through the facility as well. 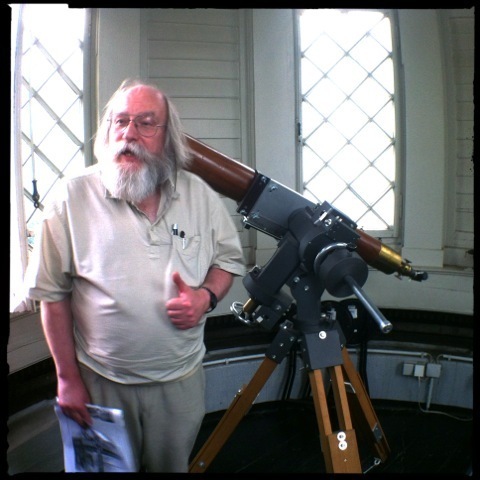 One of the astronomers also talked about his trip to the solar eclips on Easter Island. Great pictures, but sooooo many a lot of people lost their attention. But he was #awesome too.
Eventually everyone took off and the ISSHouse group decided to go and have a small drink in a pub around the corner of the hotel. Em Eckchen was the name. Locals must have thought who those crazy people were! Anyway, more people arrived in our awesome group: Olivia (@olidax), Simona (@nhaima), John (@johnniemojo), Lars (@fischblog). And you know, it was pretty:
Sunday - SpaceTweetup day!
Sunday arrived soon enough. And it was not off to a good start. The day before the zombie receptionist informed some of us that there would be no breakfast before 8am on Sunday, but when I got down in the lobby I noticed the breakfast was there anyway! So immediately I tweeted that there was food and soon enough everyone came down to grab a little bite or drink a cup of coffee. Time was critical and at checkout Jaap and me were the last to run for the SpaceTweetup bus. We arrived 10 minutes late.. Thanks a lot zombie receptionist!
But, in the end, everything worked out well and the SpaceTweetup launched! Thanks to Erica Rolfe (@ericarolfe or @esa), Daniel Scuka (@danielscuka or @esaoperations), Henning Krause (@henningkrause or @DLR_en), Andreas Schepers (@andreasschepers or @esa_de), Marco Trovatello (@marco_t or @DLR_de) and so many others to arrange this awesome day!
First stop: the SpaceTweetup tent, where we'd put all of our gear. Quickly followed by a short trip to "Zulu platform" where the amazing A380 and even moreso SOFIA 747 were located. The A380 is huge, but also very empty. Lots of wires and equipment to measure performance. Lots of grey cannisters with "water" to serve as ballast (they said it was water, but we know better, its probably Kölsch!). 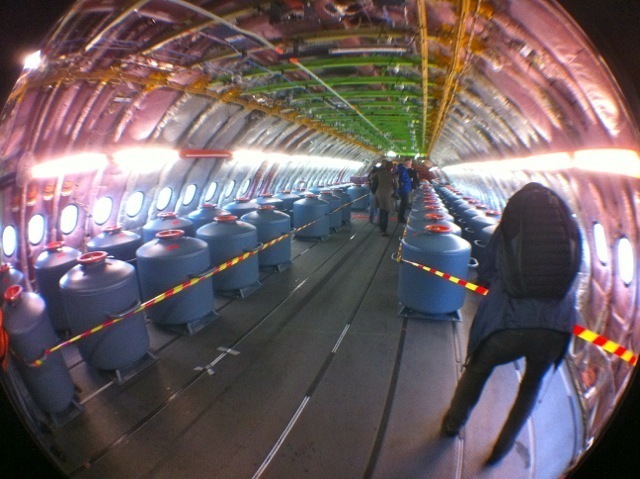 The SOFIA telescope is mindboggling. How it works is explained by pilot Tom Speer: 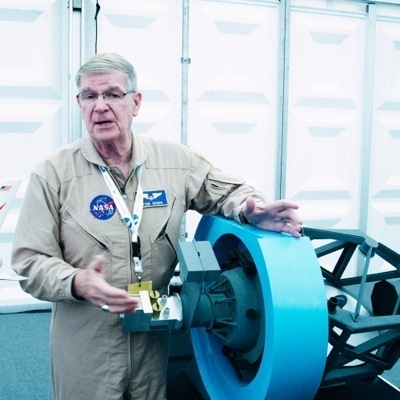 And this is how it looks from the inside: 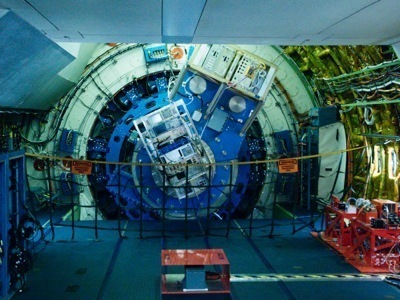 When we left back to the tent, crowds were already lining up to get into the A380 and SOFIA telescope. 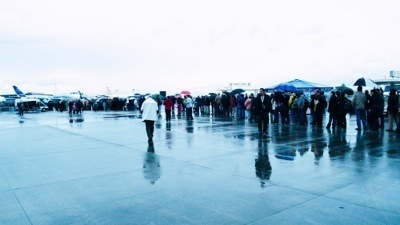 We arrived back at the tent and the packed program started off right away. A talk by Alois Himmes about the SOFIA telescope and its purpose just to warm us up for what was coming. Right after that, Paolo Nespoli (@astro_paolo) and Cady Coleman (@astro_cady) got on stage and welcomed us, and a short talk on their MagISStra experiences followed. 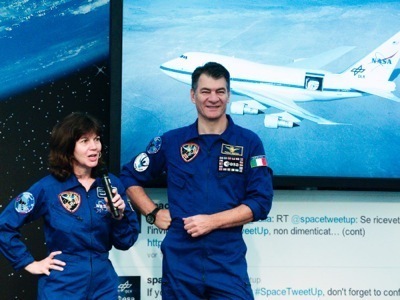 Lunch came fast! And of course a group photo. While we were all trying to find a spot on stage, Astronauts Michael Fincke (@astroironmike), Gregory Johnson (@astro_box), Greg Chamitoff (@astro_taz), Cady Coleman (@astro_cady), Paolo Nespoli (@astro_paolo), Drew Feustel rushed in to photobomb our group photo. Well, that was awesome of course! (Photo by ESA Events)
Meanwhile, the program was getting a little vague, and it almost seemed as though astronauts just randomly walked in and introduced themselves. So, I'm losing chronology here, but three more ESA astronauts were on stage during the afternoon:
Luca Parmitano (@astro_luca), Samantha Cristoforet (@astrosamantha) and the surprise new astronaut Alexander Gerst, who just got signed up for an ISS mission in 2014! All of them had great stories on what it is like to be or become an astronaut. 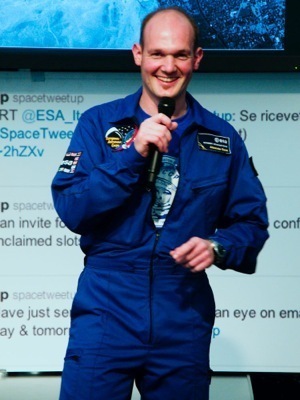 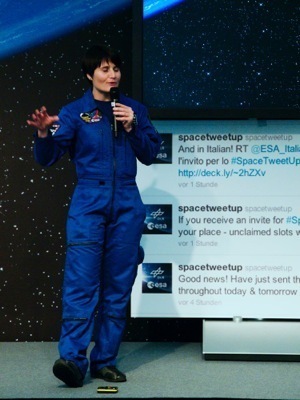 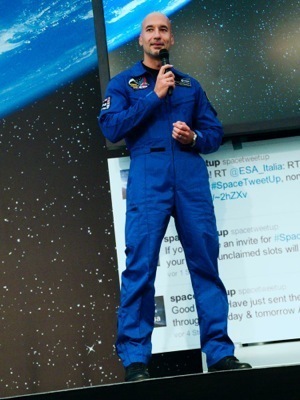 What caught my attention was that the european astronauts were so diverse and down to earth and very open. I thought this was a very big contrast to the US astronauts, who were quite similar in appearance and the way they talked. I guess it's a cultural thing. Regardless, all the astronauts were awesome, and I am very thankful for all of them finding the time to join this Spacetweetup.
But it wasn't just about astronauts, there were quite a few very interesting and entertaining science presentations too. Like Alexander Soucek's presentation on earth observations. He was awesome, and knew how to keep the crowd focussed during his whole talk. That guy just has an amazing passion for his work! 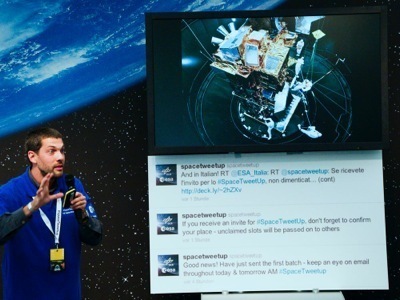 Ed Trollope (@rocketeddy) explained what the Rosetta Lander Philae (@philae2014) was supposed to do in 2014 when it reaches 67P/Churyumov-Gerasimenko comet. 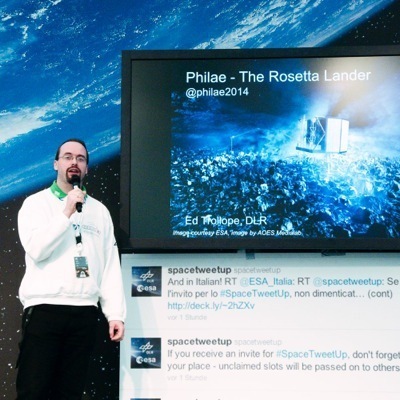 The brains behind the NASATweetups Beth Beck (@bethbeck) and Stephanie Schierholz (@schierholz) also talked about what it actually means to do a tweetup and why NASA does thing different than ESA in these events. 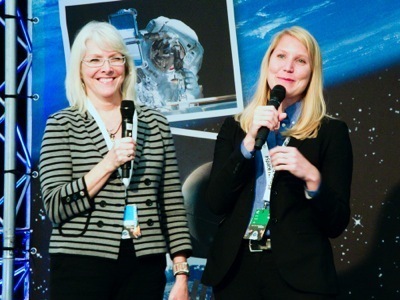 If you look at the picture you'd think they're doing stand-up comedy! And yes, they were funny, but also very interesting.
Of course we also visited the EAC facilities. The human centrifuge being one of them:
And the ISS areas: 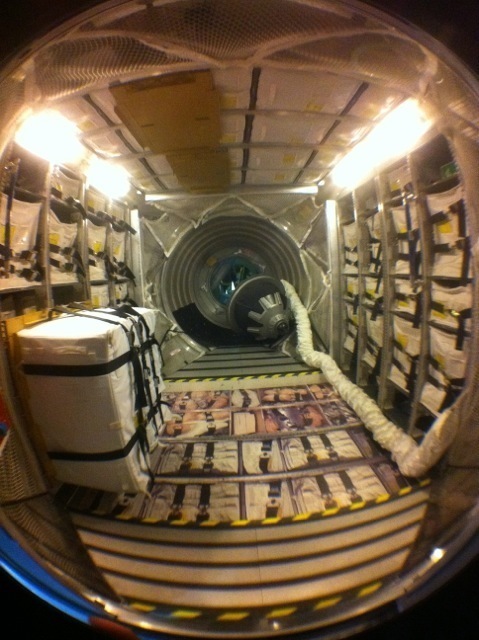