Well, it seems the identity of The Stig has been disclosed, according to ABC news and The Times. The current (white) Stig is stunt driver Ben Collins, who has been doing stunts in James Bond movies and has quite an experience as a race driver.

No word from BBC or Top Gear crew. In any case, if he truely is found to be Ben Collins, they probably have him die in some sort of freak accident and pull a new Stig (red?).

Look closely at the images, you see a striking similarity, no? 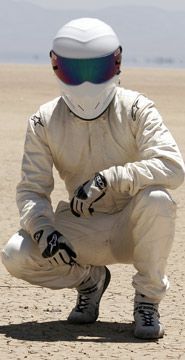