Tuesday October 22nd was a busy day for technology geeks. Both Apple and Nokia had an event, and both were streamed live.

Unfortunately for Nokia, most of their news was soon pushed to the second news page by all shiny stuff that Apple introduced. Which is kind of sad for them.

If I’m right, we will start seeing smaller LTE Android handset sets a year or so from now, and the tech press will collectively forget the “bigger is inherently better” mindset that pervades phone reviews today.

The first one with smaller sized and more efficient LTE will be an iPhone though.

Songs purchased outside of the United States iTunes Store containing DRM (Digital Rights Management) will not be matched or uploaded to iCloud.

(emphasis mine)
Argh, looks like songs that you bought in a non US iTMS before iTunes went no-DRM will not be matched to the iTunes iCloud. I have quite a few of those (living in NL I use the Dutch iTMS mostly), I never bothered to convert them to iTunes Plus. To have them matched, I probably have to convert them to iTunes Plus first, which adds quite a few euros to the bill.

So, I guess I will just download those illegally and have them matched.. WTF are you doing Apple?

I guess I was mistaken. I have 11752 items in my Music library. iTunes Match matched 11388 songs. Difference of 364 songs. I have about 2609 songs still marked as "Protected AAC" - the old DRM-ed files. Looks like those are matched anyway, and the 364 remaining are some obscure items that can't be matched (I don't have any illegal stuff in my iTunes library)

Even though Apple has released a lot of improvements in iOS5, there is still only one signature that is used for all email accounts. The default signature is "Sent from my iPhone" or "Sent from my iPad", however, in many cases you'd like to have your contact info in it.

And if you're like me, you have both your private and work email accounts configured on the device.
But there's only one signature! So, what do you do? Most will just leave it at the default. I thought that with the introduction of the keyboard shortcuts, it should be quite easy to add a separate signature for each email account. It's still not ideal, but it works.
First off, I changed the default signature to only include the signature escape and my name. For those not familiar with signature escape and (vintage) maillist systems, that is usually dash-dash-space. Most older maillist systems used to ignore everything past "-- " so I made a habit of including this in every signature. Currently most systems are more intelligent and will see the signature automagically so there's no real need for this.
Anyway, the first step:

"I have one more thing..

Oh fuck it, I don't care anymore, I'm selling this shit to Disney!

Fortune has done a survey among WWDC 2011 attendees, and the results are somewhat unsurprising, at least for me.
Since we're on an Apple event, 100% of the developers prefer to develop for iOS. Big d'oh of course. But 47% of the developers also develop for Android, so it would be nice to know what their reasoning is behind the iOS preference. That is shown in the next results, everyone thinks the iOS platform is best for monetization and is also easiest to develop for.
When the attendees were asked which platform had the highest potential for future growth, no-one mentioned BB OS, WebOS or Symbian. That's somewhat surprising. So they did mention WM7 (9%) and Android (40%). Is WebOS dead in the water before it even gets a chance? We all know the issues regarding RIM and their BlackBerry OS, so it's not really surprising no-one sees much in it anymore. It has always been a nightmare to develop for. Symbian, well, especially with the Microsoft-Nokia deal, this may just as well be killed right away.
Supposedly only 7% develop for Mac. In the press, this is often regarded that the Mac is losing developers in favor of the mobile platforms. Well, maybe, but if you check the results to the same results for the WWDC in 2008, you notice that there were hardly any mobile developers around. Since in 2008, the first "real" iPhone, the 3G was announced together with, quite important, the iPhone SDK. Remember the year before, where Jobs stated that webapps would be enough? Well, 2008 he turned things around. And only then, iOS development took off.
So, no, I don't think the Mac is losing developers. Yet.
However, these statistics and the fact that Jobs declared the computer/Mac as "just a device" for iCloud, got me thinking. Maybe, in the not to far future, developing for the platforms(*) will no longer require this huge XCode environment. The XCode environment could be trimmed to an absolute minimum if it was tied to iCloud. The SDKs would be in the cloud, so would be your libraries and other components needed for development. Only downloading components when requested (e.g. if you are going offline for some time), but even the building stage could take place in the iCloud itself.
Making the distribution very easy too. It's already in the iCloud. No more downloading of keys and all this complicated stuff. Just mark the app as "release" and in the iCloud, everything will be done for you, including distribution to the iTunes Appstore.
Going further: maybe you wouldn't need a Mac to develop anymore. Now, the Mac is your developer center, but if everything happens in the iCloud, you may just as well use an iPad. Maybe not for the big UI stuff, where screen estate is important, but for code, it's not a bad idea.
I think we are just seeing the tip of the iceberg at the moment. These Apple data centers seem overkill for just some media storage.. I bet there is a lot more coming.
(*) I intentionally state "platforms". At the moment, iOS and Mac OS X are two separate branches. I don't think that will last forever. My personal take on this is that iOS and Mac OS X will merge into one Apple OS. And this will happen when the OS X is near the end of its life time. Maybe there will be an OS X 10.8, but I think after that, both will be merged into one OS. Why maintain two branches which partly overlap? One OS for all Devices (remember what Jobs said), with features that are enabled/disabled depending on the hardware - note that this is already happening in iOS. 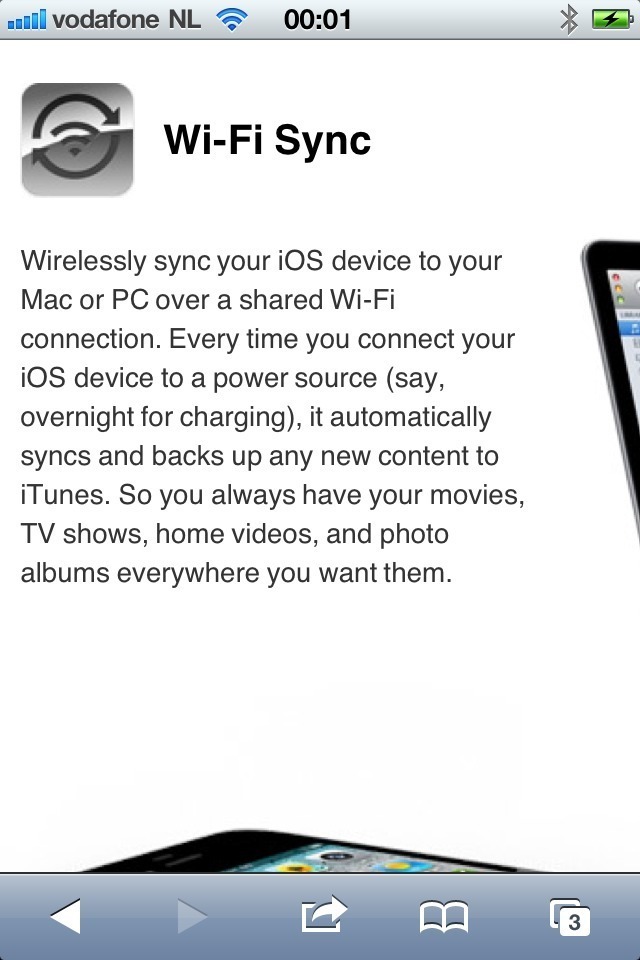 According to the Apple site, WiFi-Sync starts syncing your purchases to iTunes when your iDevice is connected to power and is in standby mode.

For many people, this will be at night, when they go to bed and they plug in their iDevices.

Now, raise your hand when you keep your Mac running during the night, especially those with a laptop.

Yesterday I tried restoring a backup to my iPad (just installed iOS 5 beta) and all of a sudden my Mac started complaining that my diskspace was too low. Eventually, there was nothing left from the 128Gig SSD I have in my Macbook.
I was confused, what was the cause? After some thorough searching I found out it was due to the size of my backup folder in iTunes.
This folder was about 50 GB in size! Not surprising since we own 2 iPads 64G, 2 iPhone 4s, 2 iPod touches and some old iPhone 3Gs.. (not all of them were backed up though)
My iTunes library is located on my 750GB HDD which I mounted instead of my SuperDrive. So I thought everything iTunes would be stored there. Wrong!
The backup is located in ~/Library/Application Support/MobileSync/Backup - right, on my space limited SSD. There is no way to change the location in iTunes itself, but thanks to Oliver Aaltonen I found a way to do so manually. On his site, you can find tips for both Mac and Windows, I will just repeat the Mac tip here:
That's it! In my case I got 50Gigs extra space on my SSD! I think this is a great tip for those people who have a Macbook Air with only 64G SSD. But everyone with smaller disks can benefit, of course.
Just another hint, if you are running OS X Lion, you'll notice the ~/Library cannot be found. This is because it is hidden. Just open up Finder, in the menu bar select "Go" and then "Go to Folder" and enter ~/Library .. this will open up the hidden folder for you.
Extra, extra tip: Just holding down the <option> key when you click "Go" in the menu bar will reveal ~/Library as an option in the list.
Tijdens mijn vakantie was er nogal veel ophef rondom het locatie tracken dat de iOS apparaten bleken te doen. Uiteraard, zoals bij alle berichten met Apple erin, weer een hoop gedoe om wat uiteindelijk niets bijzonders was.
Opvallend veel "Apple is evil" geroep, wat eigenlijk de gewoonte is als er ook maar 1 klein bugje gevonden wordt.
Reactie van Apple:
We do not share customer information with third parties without our customers’ explicit consent. Apple does not track users’ locations. Apple has never done so and has no plans to do so. An Apple device does not send to Apple any specific device information associated with a user. The purpose of the cache is to allow the device to more quickly and reliably respond to location requests. Apple was never tracking an individual user’s location. The data seen on the iphone was not the location past or present of the iPhone, but the location of cell towers surrounding the phone. Although the cache was not encrypted, it was protected from other apps on the phone.
De "Apple is evil" crowd:
Jaa, dat kunnen ze nu wel zeggen, maar wij geloven hun toch niet, de bandieten.
Da's eigenlijk net zo dan die UFO en crop circle fans en religie aanhangers. Maakt niet uit wat je aandraagt, ze zullen toch altijd blijven vasthouden aan hun redenaties.
Vermoeiend.
[edit] Amedee Van Gasse [@amedee] merkt terecht op dat hetzelfde geldt voor de "Steve is our messiah" crowd.
[edit2] Steve Gilissen [@sgilissen] leert mij een nieuwe uitdrukking kennen: twelve o'clock flasher.
Way cool, the picture shows my iPad playing "Drive" and the iPhone playing Batman: Gotham Knights animated movie. 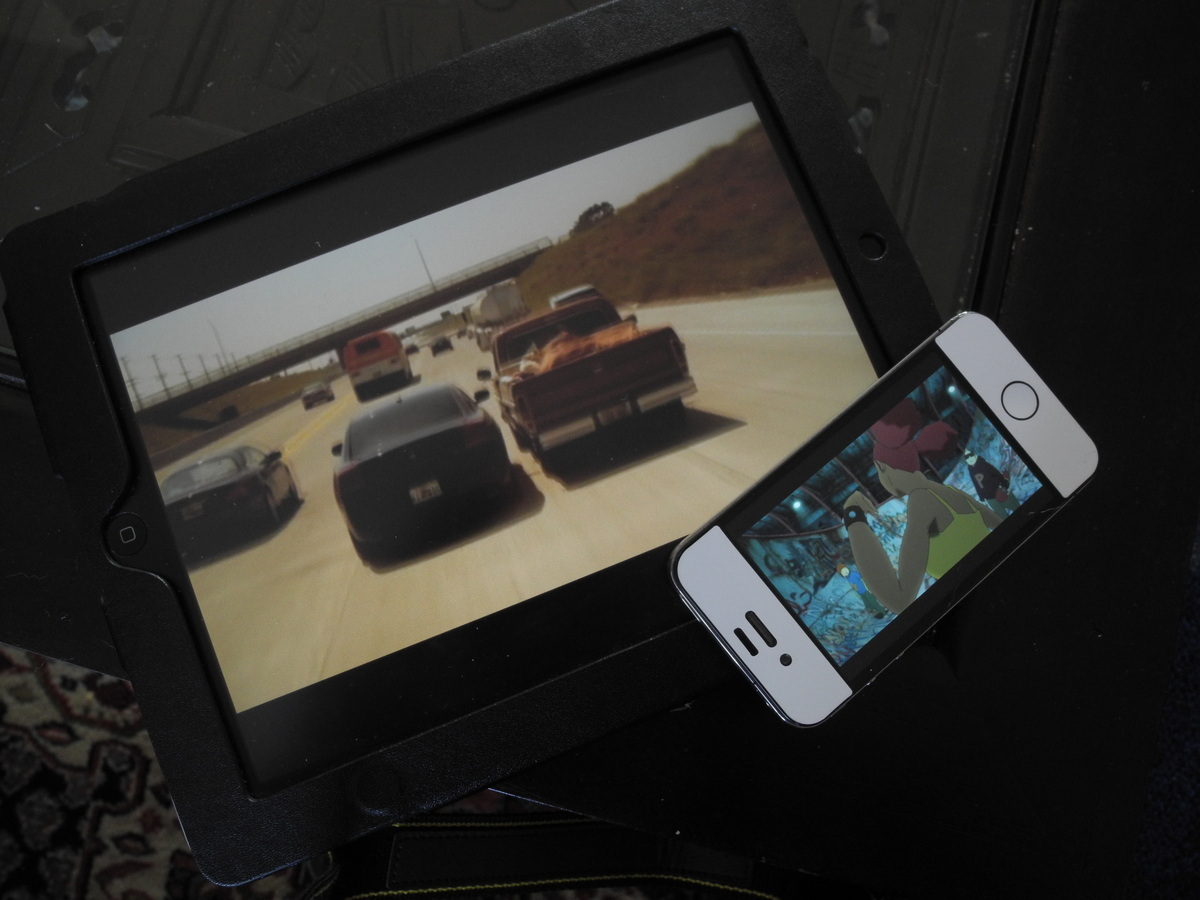 Imagine the following use case:
- WiFi in your car (using a MiFi for instance)
- Your kids in the back seat, each their own iPod Touch or iPad.
- In the passenger seat a macbookpro with iTunes