Last night my new machine "Nemesis" was brought to life.
Most issues I had was with building the computer. Some items were in backorder, and myself made a mistake ordering the monitor, so I had to exchange that too.
Anyway, The full setup:
- Asus Rampage II GENE motherboard (X58 chipset)
- Intel Core i7 920 CPU
- ATI Radeon HD4870 GPU
- 12GB Corsair DDR3-1600 RAM
- 3TB SATA Harddisks
- Scythe Kama Angle Rev2 CPU cooler
- Cooler Master Sileo black case
- Samsung P2250 monitor
It's running 10.6.2 which was a breeze to install thanks to the excellent guide from myHack
I can't believe what I see when I run Bibble 5 Pro. The processing is done in the blink of an eye. Amazing. Bibble 5 Pro fully utilizes the Quad Core Hyperthreaded i7 so all 8 "cores" are used for the maximum. But without hogging the system down.
My old iMac 20" Core Duo will not be sold, we'll be using that as usual. But my main image and movie monster is now called Nemesis :-) 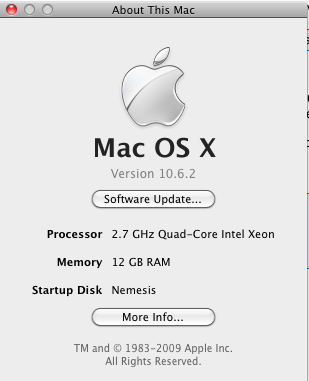 According to theAppleBlog, sales of SL are double that of Leopard.

Most will agree that the price is pushing sales high, but I also think Leopard was just not good enough. At least in my case, and talking to other Apple users, a lot of them aren't (weren't) really happy with Leopard. Leopard was suffering from "Windows syndrome". Being bloated and slow. Some of it due to carrying legacy PowerPC support, some of it by feature creep and unoptimized code. In SL there are still some loops open, but that is mostly in the application area. (iTunes is still carbon for
instance). That will change in due time (I predict an "iMovie08" makeover for iTunes next year) The OS is finally mature :-)
1 response
On a lighter note than previous posts.. Everyone seems to be doing it, and I'm going to have a go at it too.  - lots of crap talk about iTunes, Appstore successes and other sales
- 17" "unibody" MBP is a 99% cert
- New Mac Mini w/new intel CPU and no more Firefire (which would suck)
- no iMac update, these will "silently" be updated after MWSF09 I think,
unless they're going to pitch this as a "first quad core consumer
all-in-one desktop"
- updated iLife and iWork suites and
- improvements on MobileMe (again) for functionality in above suits
- no iPhone Nano (but possibly an iPod Touch Nano!)
- demo of Snow Leopard with a few bigshots in the industry and it'll be
available right after the WWDC09 possibly  I don't think there'll be much iPod/iPhone related stuff, it'll probably
be mostly Mac related. I expect a "special event" by the end of
February, March with more iPhone/iPod announcements.  There, now I am among those geeks that consider themselves important
enough that their predictions actually matter... (no, really)
1 response