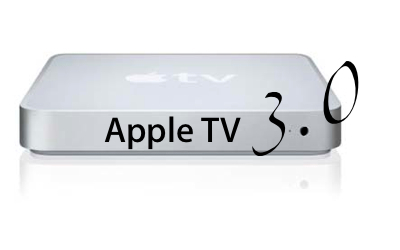 An interesting analysis of a future Apple TV generation. However, I do think the AppleTV needs to support full-HD or at minimum 1080i to be useful for *everyone*. Why? Well, a lot of people own 1080i (marketed as full-HD by the way) camcorders and they would love to play their own movies in their native resolution on the AppleTV.
It would also mean the rediculous limit of iMovie must be removed, since for some stupid reason there's no way to export a movie in the native resolution (instead it scales down to I think 720p max).

3 responses
Mediabistro reported yesterday that Microsoft will release Windows 7 in 6 versions. Mediabistro split the batch up in "what people mostly won't use" and "what they will use".
In any case, it struck me that Windows 7 "Starter Edition" (meant to be used on Netbooks) only allows for 3 concurrent apps to run. Somehow I get a deja-vu DOS feeling about this. Maybe we'll all move back to single tasking operating systems!
iPhone rumors abound. The lack of any news regarding the (vaporware!) 3rd party PUSH functionality in the iPhone OS is stirring up rumors that Apple may go and allow a limited multi-tasking on the next major iPhone OS version. Limited for the current model.. again, 2 or 3 concurrent apps are mentioned. But maybe more for a new iPhone on a modern (multi-core?) platform. Who knows, but all I can say is: hurry the fuck up with either PUSH or multi-tasking Apple!
Oh and cut&paste would be nice too....
Last week I watched a film (I think it was the X-men) on blu-ray. Setup
was a 1080p/100Hz/24p full-HD TV. And a Ps3 blu-ray. On HDMI. (not my
setup btw, I don't have a blu-ray player yet)  While the details, colors is all superb there's something that annoys
the shit out of me: playback isn't as smooth as regular DVD.  I may be imagining things, but in moving scenes, or scenes where the
camera pans, I notice that the movement isn't completely smooth. It
seems as if there constantly is a few frames dropped for some reason.
DVD in that respect is much better, with movements fluent without any
"jerking" effect.  I have no idea what causes this, I mean the setup is pretty high end and
the PS3 supposedly is the best BR player around. Still, great colors and
detail are useless when the whole movie experience is ruined by constant
erratic behaviour like above.  Does anyone know what may be the cause of this? Is it inherent to the
Blu-Ray? If that's the case, it's a big no-no to me.  I'm actually not the only one noticing this, a friend, who has a high
end JVC TV and PS3 has experienced the same jerky effect on the Blu-Ray
of Wall-E.. And I've also seen it on the combination PS3 and a HD-Ready
screen (non 1080p compliant)  Is it the PS3 that screws the experience? Is it the HDMI standard?  I have no clue, but since there's only one common denominator above, I
bet the PS3 has something to do with it. Can someone chime in on this?
17 responses